This book explores the complexity of women's social status in the Middle East and North African region and fills a gap in the existing literature by providing an up-to-date and comprehensive portrait of women's status from a theoretical and socio-demographic perspective. The author debunks some common assumptions regarding the economic, cultural, and demographic transformations of the MENA region. The book highlights the social forces that have transformed the region over the past several decades. Debunking requires exploring the inter-relationship of multiple factors that influence women's integration into public life, factors such as fertility, education and employment. It necessitates examining the impact of sudden oil wealth in the region as well as looking at the complex ways in which patriarchal systems are intertwined and often embedded in religion and then enforced by governments.

​​​​​​​"Women in the Middle East and North Africa explores the status of women by examining the interrelationship of multiple factors such as fertility, education, employment, and labor migration. Haghighat...debunks the popular perceptions through exploring the complex interplay of the patriarchal systems with the Islamic religion and the male-dominated government system...[and] leads the reader to an understanding of women's status in the Middle East...[The book] is an important contribution to the field of women/ Middle Eastern studies by demystifying some of the popular perceptions about the status of women in this region by basing the analysis on a review of empirical evidence... the work leads us to a different and alternative perception, which is a useful tool to help focus on policy and development issues." - Journal of Comparative Social Welfare.

"The work dispels common views of the homogenous impact of religion and culture on women, and it does so through the theoretical lens ......Haghighat's...empirical work supports her argument that economic and political factors interact with preexisting patterns of Islam to delimit women's social mobility. Summing Up: Recommended." - CHOICE

By exploring the interrelationship of the many factors that affect Muslim women's social roles, rather than attributing the subjugation of women exclusively to the ideology of Islam, Haghighat-Sordellini seeks to eliminate simplistic and reductionist stereotypes of women in the MENA region and highlight instead the complexity of their socioeconomic conditions." - Middle East Journal

"A solid piece of scholarship. It is theoretically well-grounded, empirically rich, balanced, and thorough in its coverage of the subject matter. . .I strongly recommend this book to anyone wishing to get a nuanced analysis of women in the Middle East." — Mehran Kamrava, author of Iran's Intellectual Revolution (Cambridge Univeristy Press), Professor of Political Science and Director, Center for International and Regional Studies, Georgetown University, School of Foreign Service, Qatar.

"In this meticulously researched and lucidly written book, Haghighat-Sordellini trounces myths and sets the record straight about the conditions surrounding women in the Middle East and North Africa. She proves that no standard generalization about female subordination or victimization applies to the region. Women emerge as valiant agents shaping their own fate by waging battle against the strictures of patriarchal domination." — Patricia Fernández-Kelly, Princeton University, Department of Sociology and Office of Population Research.

“Haghighat’s work is solid, strong, and a major contribution to the field of women in the Muslim world from historical and socio-cultural perspectives. She combines qualitative and quantitative approaches, a crucial undertaking since much of what is written on women tends to be qualitative and subject to criticisms from those who emphasize quantitative data. Haghighat-Sordellini’s work encourages readers to move away from simplistic, stereotypical, and generally negative images of women in the Muslim world by focusing on socio-economic factors rather than ideology (Islam). She challenges those who tend to take a reductionist view of the role of women in Muslim countries.”-- Roksana Bahramitash, Chair of Research on Islam, Pluralism and Globalization, University of Montreal, Canada (Directrice à la recherche, Chaire de recherche du Canada en Islam, Pluralisme, et Globalisation, Université de Montréal)
​

Selected publicity article about the book:  Women in MENA book by Professor Haghighat 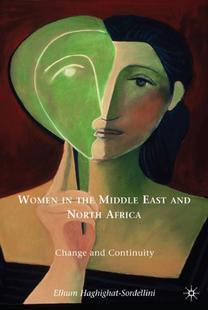 Women in the Middle East and North Africa; Change and Continuity